ALSO NATIVES OF PRAGUE / Our Animal Neighbours in Trouble

Prague, a city of opportunities. Also for animals

Most tourists and visitors coming to the capital of the Czech Republic for the first time wish to see primarily the famous buildings and monuments that are woven into the tapestry of Czech history and that formed the past of our nation. However, Prague is not just a fascinating historical gem. Its natural riches are also extremely valuable, making it one of the greenest metropolises in the world. The heartbeat of the metropolis is calmed by the parks, tree-lined avenues, and thousands of hectares of preserved forests found here. The Vltava River flows through the city centre and is filled with water by dozens of Prague streams from both its sides. There are meadows, orchards, fields, fishponds, cliffs, and many protected nature areas.

The diversity that nature in Prague offers also suits a variety of wild animal species, which live alongside us in the capital. Although often inconspicuous, their stories remaining a mystery to us humans, they are also NATIVES OF PRAGUE, our neighbours. They find their habitat and source of food here in Prague; however, life in the metropolis in direct proximity with people also carries many risks for them. Heavy traffic, extensive glassy surfaces, tram lines and other invisible obstacles, unleashed dogs, string trimmers, excessive noise, light wells, chimneys, or various nets that the animal can get caught in. Wild animals in Prague must deal with all of this. And they are not always successful in avoiding these dangers.

Who cares for the animal patients?

Luckily, not every clash of these animals with our civilisation must end tragically if adequate help is sought out in time. The Prague Municipal Wild Animal Rescue Station is here for the wild animals that are injured or get into trouble that they cannot get out of in the city. The rescue station, which is part of the Lesy hl. m. Prahy (Forests of Prague) state-funded organisation, cares for these wounded and otherwise handicapped wild animals with the objective of returning them to nature once healed. It annually admits more than 5,000 animals, making it the busiest rescue station in the Czech Republic.

Its patients are usually hedgehogs, squirrels, kestrels, swans, ducks, bats, hares, blackbirds, or swifts, and many other common and rare animals that live alongside us in Prague. About two-thirds of the patients are birds, the remaining animals are mammals. Most often, they suffer from various injuries; another large group of patients are orphaned or abandoned dependent baby animals. The rescue station helps them seven days a week, 365 days a year.

This year, the Prague Municipal Wild Animal Rescue Station celebrates 10 years of its existence. Since launching operations in 2012 until the end of 2021, a total of 37,613 wounded wild animals, orphaned baby animals, and other animal patients were handled here. These included, for example, 5,107 hedgehogs, 1,331 hares, or 1,811 bats and thousands of other mammals and birds of more than 100 various species.

However, behind these gigantic numbers, we primarily find the concrete fates of animals, not to mention the endless hours of selfless care provided by the animal rescuers. Through the photographs of these animal patients, we would like to present the work of the rescue station, as well as to thank everyone who supports the work of the station and helps wild animals. We would also like to remind everyone of the importance of not being indifferent to your surroundings, especially to those who cannot explicitly ask for help. 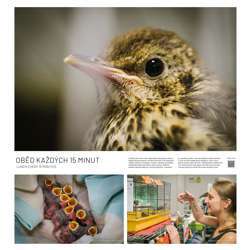 Of the songbird nestlings that get to us, we most often take in blackbirds and tits. Each year, we care for about 100 blackbird and 120 tit nestlings. They often lose their nest, are attacked by a predator (e.g., a cat), or their parents die. Sometimes, people “rescue” nestlings from nature needlessly, thinking that they fell out of their nest. During the nestling season, we commonly care for more than 100 songbird nestlings at once. However, care for them is very time consuming – each nestling must be fed in 10–15-minute intervals from dawn until dusk. During the summer, this means 60-90 feedings per nestling per day!

A Herd of “Therapists” 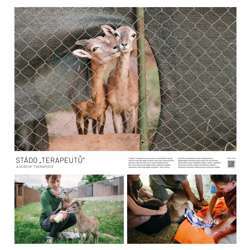 For many years now there has been a free-range herd of mouflons on the grounds of Thomayer Hospital near the Kunratice Forest. They find the niches between the hospital pavilions to be more peaceful than the heavy traffic of the forest. Their presence especially pleases the patients of the hospital, who welcome each distraction. Sadly, even these mouflons sometimes become patients. The most common reason for their admission to our animal rescue centre are serious injuries caused by crashing into cars, for example, fractures of the extremities. Each year, we admit several wounded mouflons or abandoned mouflon lambs. 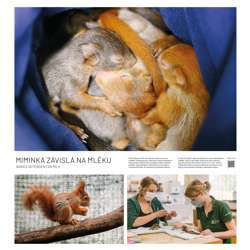 Each year, we take in some 120 –140 squirrels, mostly babies. They need help if, for example, their nest falls down during a storm or when cutting down trees, if a predator attacks them, or if their mother dies, forcing them to leave the nest due to hunger. Usually, we care for babies aged 3-5 weeks, but sometimes we also take in several-day-old babies. The rearing of such small squirrels is rather difficult, because it consists of frequent feeding, even throughout the night. A baby squirrel begins to eat solid food in its 8th week, until then it is completely dependent on infant formula.

The Tricky Slalom between Bridges 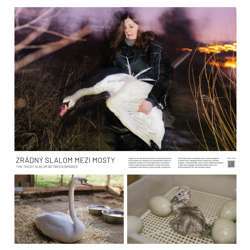 Swans get to our animal rescue centre especially due to injuries caused by hitting the tram trolley lines on Prague bridges. These lines are invisible from afar for the flying swans, and when the birds notice them at the last moment, it is usually too late. Swans are large and heavy birds and cannot react fast enough to change direction. More often than not, the consequences of theses crashes are tragic – broken wings, concussions, serious contusions, and in the worst cases, broken spines or death. Each year, we admit 130–150 wounded swans. 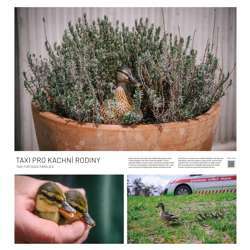 Mallards rank among our most common avian patients, and we record 400-500 “duck cases” annually. They usually need the most help in the spring when the hens begin to nest. In Prague, they often contend with a lack of peaceful sites around water that would be suitable for nesting. Thus, the ducklings often hatch in locations that although peaceful, are absolutely unsuitable, such as balconies, house terraces, roofs, or enclosed courtyards. In such cases, the hen cannot safely lead her ducklings safely to the water and needs assistance in moving her babies.

Fans of our Gardens 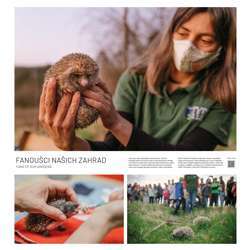 Hedgehogs are our most frequent mammalian patients. They require a varied habitat for life, where grassy surfaces alternate with groves and thick brush, and where insects – their main source of food – are plentiful. In today’s landscape, such places are disappearing. Therefore, hedgehogs search for alternative shelters in our gardens. Life near man, however, is full of various hazards. Hedgehogs are threatened by cars, dogs without leash, and lawn-mower strings. And if a tragedy befalls the hedgehog mother while she is caring for her young, it also affects them. Each year, we care for 650-700 hedgehogs, 200-300 of which are hedgehog orphans.

The Royals of the Prague Heavens 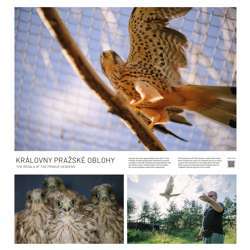 The common kestrel is most common bird of prey living in Prague. Kestrels have wonderfully adapted to the urban environment and are able to find enough food here (especially mice but they can also catch pigeon nestlings), as well as nesting places. However, they, too, cannot fly away from all dangers. Each year, we admit 100–150 kestrels, usually for injuries caused by crashing into glass surfaces, into cars, or by getting entangled into nets or similar traps. Our patients also include young kestrels, which for some reason get out of their nests.

Lonely does not mean Orphaned 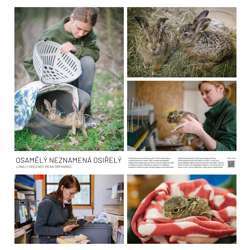 Although its original habitat were fields, the hare has become a common feature of urban nature. In today’s agricultural landscape, hares do not have a suitable habitat, so they move to cities, where you can easily spot them in parks and in housing developments. It is in these places that the leverets are born, and people often rescue them unnecessarily, thinking that they are orphans. Each year, we take in more than 200 hares, and about 80 % of them are leverets. However, female hares leave their young alone on purpose to avoid luring predators to them. They only return to feed them during the night. If a leveret is lying quietly in the grass, it does not need help. 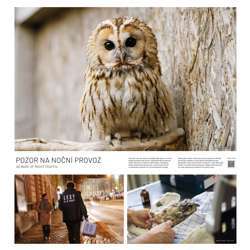 Owls are rarely admitted to our rescue centre, but they sometimes need our help too. We most often treat long-eared owls, which are the most populous in the capital. You can recognise them by their characteristic feathers around their ears and their orange-coloured eyes. Aside from long-eared owls, we also treat tawny owls. Both species are used to the urban environment and can find enough food here (primarily mice), as well as options for nesting. Their major problem, however, is road transport. Many owl patients recover from crashing into cars at the centre.

Fall Asleep and Wake up in a Trap 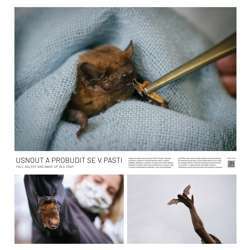 Each year, we take in approximately 100–200 bats. Usually, these are weak or injured bats or orphaned young, or bats woken up from hibernation. In cities, bats like to hibernate in wall apertures or in various ventilation shafts. Whole colonies numbering dozens to hundreds of bats hibernate through the winter in this manner. However, when reconstructing flats or houses, such shelters can be easily damaged. We have a record case from 2018, when we saved 199 common noctules from their demolished wintering place located in a building in Libeň. 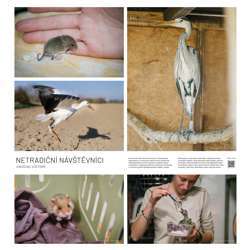 Those that Remain with Us 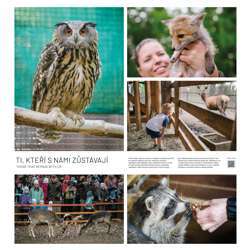 Although our goal is to return as many of our patients back to nature as possible, some animals suffer permanent damage that prevents them from returning to normal life in the wild. They find a dignified alternative home, for example, in our forest zoos, functioning as detached workplaces of the rescue centre. These facilities are open to the public. Visitors to these mini zoos can learn about specific animals, as well as their stories, thus learning about the problems that wild animals face in cities. 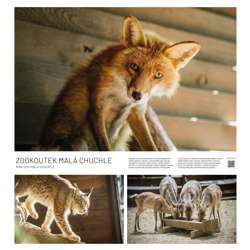 The largest of our mini zoos for permanently handicapped animals is found near the gamekeeper’s lodge in the Chuchle Forest. Its residents include, e.g., the Eurasian lynx, a herd of mouflons, fallow deer and red deer, two foxes – one of which was illegally raised in captivity since a cub and thus lost its natural instincts, the other lost a part of a leg, a Eurasian eagle-owl with a partially amputated wing, and a number of other birds that have for some reason lost the ability to fly. You can adopt any of the permanently handicapped animals that remain in our care, thus supporting the work of the animal rescue centre financially.